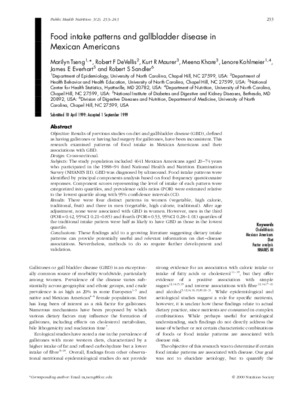 Objective: Results of previous studies on diet and gallbladder disease (GBD), defined as having gallstones or having had surgery for gallstones, have been inconsistent. This research examined patterns of food intake in Mexican Americans and their associations with GBD. Design: Cross-sectional. Subjects: The study population included 4641 Mexican Americans aged 20±74 years who participated in the 1988±94 third National Health and Nutrition Examination Survey (NHANES III). GBD was diagnosed by ultrasound. Food intake patterns were identifed by principal components analysis based on food frequency questionnaire responses. Component scores representing the level of intake of each pattern were categorized into quartiles, and prevalence odds ratios (POR) were estimated relative to the lowest quartile along with 95% confidence intervals (CI). Results: There were four distinct patterns in women (vegetable, high calorie, traditional, fruit) and three in men (vegetable, high calorie, traditional). After age adjustment, none were associated with GBD in women. However, men in the third (POR = 0.42, 95%CI 0.21±0.85) and fourth (POR = 0.53, 95%CI 0.28±1.01) quartiles of the traditional intake pattern were half as likely to have GBD as those in the lowest quartile. Conclusions: These findings add to a growing literature suggesting dietary intake patterns can provide potentially useful and relevant information on diet±disease associations. Nevertheless, methods to do so require further development and validation