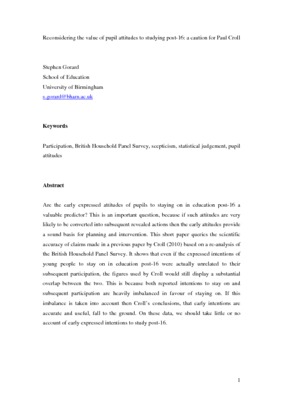 Reconsidering the value of pupil attitudes to studying post-16: a caution for Paul Croll

Are the early expressed attitudes of pupils to staying on in education post-16 a valuable predictor? This is an important question, because if such attitudes are very likely to be converted into subsequent revealed actions then the early attitudes provide a sound basis for planning and intervention. This short paper queries the scientific accuracy of claims made in a previous paper by Croll (2010) based on a re-analysis of the British Household Panel Survey. It shows that even if the expressed intentions of young people to stay on in education post-16 were actually unrelated to their subsequent participation, the figures used by Croll would still display a substantial overlap between the two. This is because both reported intentions to stay on and subsequent participation are heavily imbalanced in favour of staying on. If this imbalance is taken into account then Croll’s conclusions, that early intentions are accurate and useful, fall to the ground. On these data, we should take little or no account of early expressed intentions to study post-16