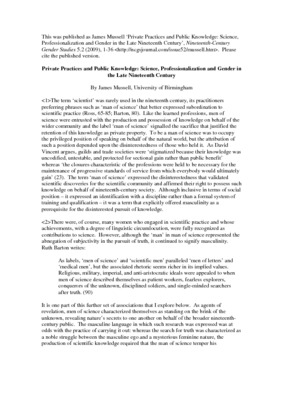 The term “scientist” was rarely used in the nineteenth century, its practitioners preferring phrases such as “man of science” that better expressed subordination to scientific practice. (Ross, 65-85; Barton, 80) Like the learned professions, men of science were entrusted with the production and possession of knowledge on behalf of the wider community and the label “man of science” signalled the sacrifice that justified the retention of this knowledge as private property. To be a man of science was to occupy the privileged position of speaking on behalf of the natural world, but the attribution of such a position depended upon the disinterestedness of those who held it. As David Vincent argues, guilds and trade societies were “stigmatized because their knowledge was uncodified, untestable, and protected for sectional gain rather than public benefit” whereas “the closures characteristic of the professions were held to be necessary for the maintenance of progressive standards of service from which everybody would ultimately gain.” (23) The term “man of science” expressed the disinterestedness that validated scientific discoveries for the scientific community and affirmed their right to possess such knowledge on behalf of nineteenth-century society. Although inclusive in terms of social position – it expressed an identification with a discipline rather than a formal system of training and qualification – it was a term that explicitly offered masculinity as a prerequisite for the disinterested pursuit of knowledge