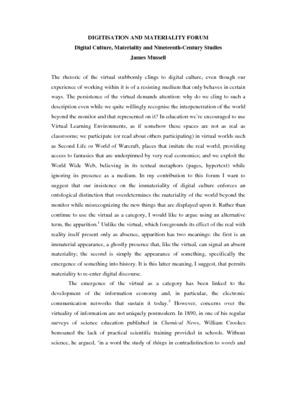 The rhetoric of the virtual stubbornly clings to digital culture, even though our experience of working within it is of a resisting medium that only behaves in certain ways. The persistence of the virtual demands attention: why do we cling to such a description even while we quite willingly recognise the interpenetration of the world beyond the monitor and that represented on it? In education we’re encouraged to use Virtual Learning Environments, as if somehow these spaces are not as real as classrooms; we participate (or read about others participating) in virtual worlds such as Second Life or World of Warcraft, places that imitate the real world, providing access to fantasies that are underpinned by very real economics; and we exploit the World Wide Web, believing in its textual metaphors (pages, hypertext) while ignoring its presence as a medium. In my contribution to this forum I want to suggest that our insistence on the immateriality of digital culture enforces an ontological distinction that overdetermines the materiality of the world beyond the monitor while misrecognizing the new things that are displayed upon it. Rather than continue to use the virtual as a category, I would like to argue using an alternative term, the apparition.1 Unlike the virtual, which foregrounds its effect of the real with reality itself present only as absence, apparition has two meanings: the first is an immaterial appearance, a ghostly presence that, like the virtual, can signal an absent materiality; the second is simply the appearance of something, specifically the emergence of something into history. It is this latter meaning, I suggest, that permits materiality to re-enter digital discourse