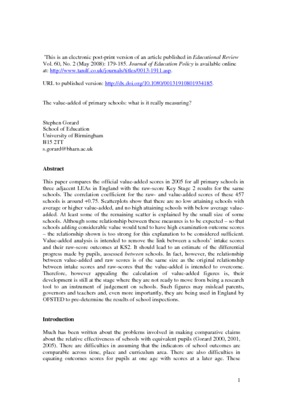 The value-added of primary schools: what is it really measuring?

This paper compares the official value-added scores in 2005 for all primary schools in three adjacent LEAs in England with the raw-score Key Stage 2 results for the same schools. The correlation coefficient for the raw- and value-added scores of these 457 schools is around +0.75. Scatterplots show that there are no low attaining schools with average or higher value-added, and no high attaining schools with below average value-added. At least some of the remaining scatter is explained by the small size of some schools. Although some relationship between these measures is to be expected – so that schools adding considerable value would tend to have high examination outcome scores – the relationship shown is too strong for this explanation to be considered sufficient. Value-added analysis is intended to remove the link between a schools’ intake scores and their raw-score outcomes at KS2. It should lead to an estimate of the differential progress made by pupils, assessed between schools. In fact, however, the relationship between value-added and raw scores is of the same size as the original relationship between intake scores and raw-scores that the value-added is intended to overcome. Therefore, however appealing the calculation of value-added figures is, their development is still at the stage where they are not ready to move from being a research tool to an instrument of judgement on schools. Such figures may mislead parents, governors and teachers and, even more importantly, they are being used in England by OFSTED to pre-determine the results of school inspections