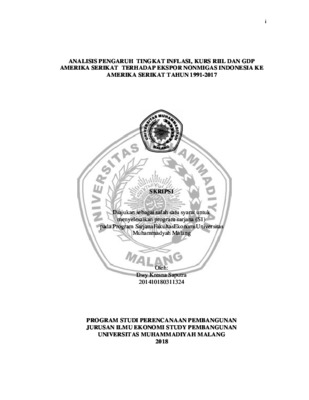 Globalization is opening gate of the relation between one country with other countries. Integration process among countries on a global scale manifesting the existence of globalization of market and globalization of production that create the existence of international trade between countries .International trade is the form of cooperation between two countries or more that gives benefit directly .The form of cooperation between the countries is export and import . Indonesian economy can not be separated from the changes of other countries and the world economy in general . In 1982 indonesia has promoted exporting of oil and gas and non-oil and gas sector , between those two sector exports of non-oil and gas sector have took a significant role of the entire of indonesia exports .In trade relations , United States is one of indonesia's largest business on non-oil and gas sector and that is one of the biggest surplus contributors for the foreign exchange. This study uses annual data (time series)from 1991-2017. The analytical tool used in this study is multiple linear regression using the OLS (Ordinary Least Square) approach and the Classic Assumption Test processed with E-views. Based on the estimation results, the inflation rate has a positive and significant effect, the rill rate has a negative and significant effect, while the GDP of the United States has a positive and significant effect on Indonesia's non-oil and gas exports to the United States from 1991-2017