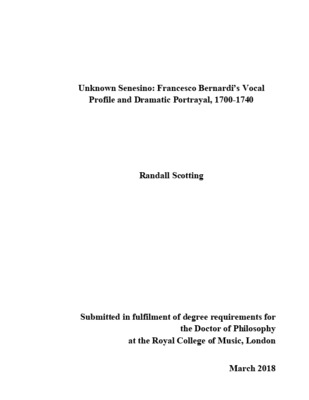 Francesco Bernardi (known as Senesino: 1686-1759) is recognised as one of the most prominent singers of the eighteenth century. With performing credits throughout Europe, he was viewed as a contralto castrato of incredible technical accomplishment in voice and dramatic portrayal. Yet, even considering his fame, success, and frequent and prominent scandals, Senesino has remained little-researched today. The eighteen operas newly composed by George Frideric Handel (1685-1759) for him have been the primary reference sources which define current views of Senesino’s voice. For example, regarding the singer’s vocal range, Winton Dean states the following based on Charles Burney’s account of Senesino: ‘His compass in Handel was narrow (g to e″ at its widest, but the g appears very rarely, and many of his parts, especially in later years, do not go above d″) [… ] Quantz’s statement that he had ‘a low mezzo-soprano voice, which seldom went higher than f ″’ probably refers to his earliest years.’* Dean’s assessment is incomplete and provides an inaccurate sense of Senesino’s actual vocal range, which, in fact, extended beyond his cited range to g''. The upper reaches of Senesino’s voice were not only utilised in his ‘earliest years’ but throughout the entirety of his career. Operas such as Giulio Cesare, Rodelinda, and Orlando account for only a small portion of the 112 operatic works in which the singer is known to have performed during his forty years on stage. This thesis expands perceptions of Senesino’s vocal range and aspects of technical skill in vocal and dramatic portrayal to provide an informed sense of the singer from the time of his operatic début to his final years performing. In Volume I elements of Senesino’s career from 1700 to 1740 are assessed. Volume II comprises musical examples, aria transcriptions, a catalogue of all known operatic performances in which Senesino sang, and dramatic considerations that further contextualise the singer’s talents. To identify clearly his abilities and experience, Chapter 1 introduces primary source accounts of Senesino’s voice, dramatic portrayal, personal style of performance, rhetorical delivery, skill with ornamentation (including his famed messa di voce), and personality. The crafting of fame was also an important aspect of any eighteenth-century singer’s success. Senesino, like Farinelli and many other castrati of his time, was active in shaping the type, content, and musical and dramatic qualities of his roles. Only recently have aspects of singer involvement in role development been truly considered; this thesis is one of the first to bring focus on to Senesino in this regard. Three periods in Senesino’s operatic career are defined in this thesis and aspects of the singer’s changing voice, relationship with colleagues and composers, and dramatic portrayal are considered. Senesino built his reputation in Italian and German early-career performances from 1700 to 1719: Chapter 2 assesses Giovanni Maria Ruggieri’s 1707 opera Armida abbandonata illustrating how the singer was already viewed favourably in comparison to his established colleagues Nicolini and Maria Anna Garberini Bentì (la Romanina). Senesino performed predominantly in London from 1720 to 1733 and upon his arrival there, he faced unfavourable public perception and endeavoured to change his off-stage reputation through the characters he portrayed on stage, particularly in the operas of Giovanni Bononcini (1670-1747). In Chapter 3 specific aspects of Senesino’s intervention to shape his vocal and dramatic portrayals are delineated in relation to Bononcini’s 1722 opera La Griselda. Senesino’s late career from 1733 to 1740 is addressed in Chapter 4 and elements of vocal deterioration, competition, resentment, and the singer’s over-zealous intervention to secure work are assessed in relation to Eumene, by Giovanni Antonio Giaj (1690-1764). While the primary focus of this thesis is Senesino himself, biographical information and an evaluation of compositional style for Giovanni Maria Ruggieri, Giovanni Bononcini, and Giovanni Antonio Giaj are also detailed. *Winton Dean, ‘Senesino,’ GMO, accessed 24 August 2017. See also Charles Burney, The Present State of Music in Germany, the Netherlands, and the United Provinces, 2nd edn, 2 vols (London: T. Becket and Co., 1775), II, 175-76