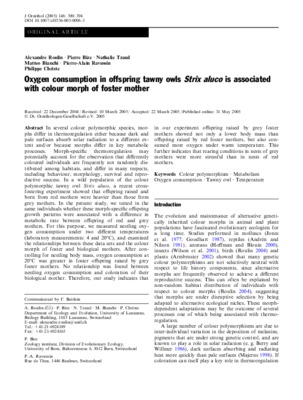 In several colour polymorphic species, morphs differ in thermoregulation either because dark and pale surfaces absorb solar radiation to a different extent and/or because morphs differ in key metabolic processes. Morph-specific thermoregulation may potentially account for the observation that differently coloured individuals are frequently not randomly distributed among habitats, and differ in many respects, including behaviour, morphology, survival and reproductive success. In a wild population of the colour polymorphic tawny owl Strix aluco, a recent cross-fostering experiment showed that offspring raised and born from red mothers were heavier than those from grey mothers. In the present study, we tested in the same individuals whether these morph-specific offspring growth patterns were associated with a difference in metabolic rate between offspring of red and grey mothers. For this purpose, we measured nestling oxygen consumption under two different temperatures (laboratory measurements: 4 and 20 degrees C), and examined the relationships between these data sets and the colour morph of foster and biological mothers. After controlling for nestling body mass, oxygen consumption at 20 degrees C was greater in foster offspring raised by grey foster mothers. No relationship was found between nestling oxygen consumption and coloration of their biological mother. Therefore, our study indicates that in our experiment offspring raised by grey foster mothers showed not only a lower body mass than offspring raised by red foster mothers, but also consumed more oxygen under warm temperature. This further indicates that rearing conditions in nests of grey mothers were more stressful than in nests of red mothers