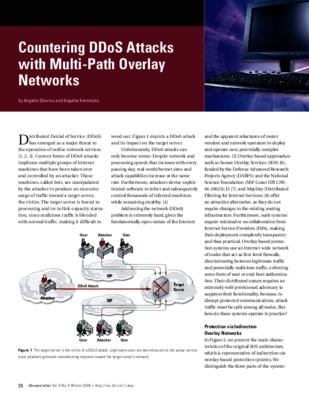 By Angelos Stavrou and Angelos D. Keromytis
Get PDF (5 MB)

Distributed Denial of Service (DDoS) has emerged as a major threat to the operation of online network services [1, 2, 3]. Current forms of DDoS attacks implicate multiple groups of Internet machines that have been taken over and controlled by an attacker. These machines, called bots, are manipulated by the attacker to produce an excessive surge of traffic toward a target server, the victim. The target server is forced to processing and/or to link-capacity starvation, since malicious traffic is blended with normal traffic, making it difficult to weed out. Figure 1 depicts a DDoS attack and its impact on the target server