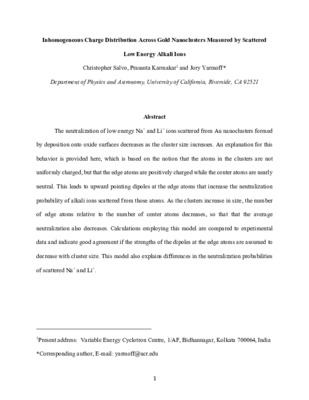 The neutralization of low energy Na$^+$ and Li$^+$ ions scattered from Au nanoclusters formed by deposition onto oxide surfaces decreases as the cluster size increases. An explanation for this behavior is provided here, which is based on the notion that the atoms in the clusters are not uniformly charged, but that the edge atoms are positively charged while the center atoms are nearly neutral. This leads to upward pointing dipoles at the edge atoms that increase the neutralization probability of alkali ions scattered from those atoms. As the clusters increase in size, the number of edge atoms relative to the number of center atoms decreases, so that that the average neutralization also decreases. Calculations employing this model are compared to experimental data and indicate good agreement if the strengths of the dipoles at the edge atoms are assumed to decrease with cluster size. This model also explains differences in the neutralization probabilities of scattered Na$^+$ and Li$^+$.Comment: 36 pages, 5 figure