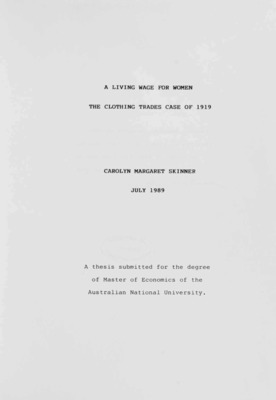 A living wage for women : the Clothing Trades case of 1919

During the period from 1907 to 1921 Mr Justice Higgins, in his capacity as President of the Commonwealth Court of Conciliation and Arbitration, delivered a number of judgements which were to have a significant influence on the process of wage fixation in Australia long after he resigned from the Presidency, The first, though it was not an arbitration case, was the so-called "Harvester" judgement in which he established the principle that the minimum or "living" wage for an unskilled male should be sufficient to enable him to support a family in "frugal comfort". At that time (1907) there was no assessment of what constituted an appropriate "living wage" for unskilled females as the issue did not arise. Subsequently, however, there were several opportunities in which it would have been possible to determine the female "living wage" but it was not until 1919 that this issue was finally resolved. The basis and circumstances of the "Harvester" judgement have received substantial academic attention. Of particular importance is the study, undertaken by P.G. McCarthy, which traced the development of the concept of a living wage in the Australian context and its ultimate expression as an "ideal" of seven shillings per day. McCarthy, however, was not able to determine with any certainty the basis of Higgins' decision in the Harvester case. This uncertainty as to Higgins' motivation is also applicable to his decision in the Clothing Trades case in 1919. This case has received little detailed analysis with most commentators relying on Higgins' printed judgement to explain the outcome. The sequence of cases leading up to the Clothing Trades case and the process by which Higgins reached his decision on the "living wage" for females are the subject of this thesis. The conclusion, however, is that the basis of Higgins' living wage award for females is no more certain than his award for males