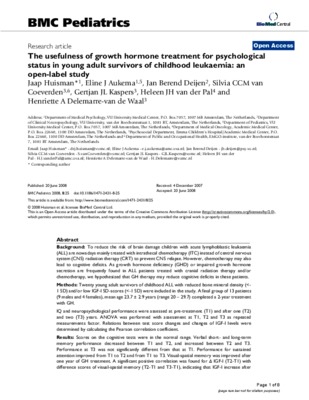 The usefulness of growth hormone treatment for psychological status in young adult survivors of childhood leukaemia; an open-label study

-1 SD) were included in the study. A final group of 13 patients (9 males and 4 females), mean age 23.7 ± 2.9 years (range 20 – 29.7) completed a 2-year treatment with GH. IQ and neuropsychological performance were assessed at pre-treatment (T1) and after one (T2) and two (T3) years. ANOVA was performed with assessment at T1, T2 and T3 as repeated measurements factor. Relations between test score changes and changes of IGF-I levels were determined by calculating the Pearson correlation coefficient. Results Scores on the cognitive tests were in the normal range. Verbal short- and long-term memory performance decreased between T1 and T2, and increased between T2 and T3. Performance at T3 was not significantly different from that at T1. Performance for sustained attention improved from T1 to T2 and from T1 to T3. Visual-spatial memory was improved after one year of GH treatment. A significant positive correlation was found for Δ IGF-I (T2-T1) with difference scores of visual-spatial memory (T2-T1 and T3-T1), indicating that IGF-I increase after one year of GH treatment is associated with increase in cognitive-perceptual performance at month 12 and 24. Conclusion Since the level of intellectual functioning of our patient cohort was in the normal range the present finding that GH treatment has negative effects on verbal memory and positive on attention and visual-spatial memory warrants similar studies in other groups of ALL survivors. Also, a lower dose of GH should be determined inducing as much IGF as needed to improve verbal as well as visual cognitive functions. The present findings indicate that more knowledge is needed before GH treatment may be recommended to enhance cognitive functions in ALL survivors