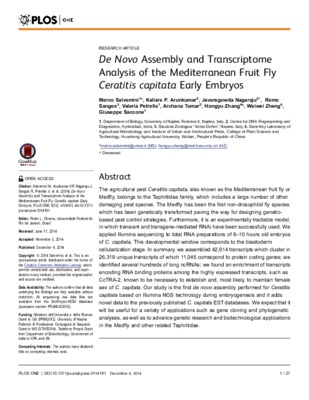 The agricultural pest Ceratitis capitata, also known as the Mediterranean fruit fly or Medfly, belongs to the Tephritidae family, which includes a large number of other damaging pest species. The Medfly has been the first non-drosophilid fly species which has been genetically transformed paving the way for designing geneticbased pest control strategies. Furthermore, it is an experimentally tractable model, in which transient and transgene-mediated RNAi have been successfully used. We applied Illumina sequencing to total RNA preparations of 8-10 hours old embryos of C. capitata, This developmental window corresponds to the blastoderm cellularization stage. In summary, we assembled 42,614 transcripts which cluster in 26,319 unique transcripts of which 11,045 correspond to protein coding genes; we identified several hundreds of long ncRNAs; we found an enrichment of transcripts encoding RNA binding proteins among the highly expressed transcripts, such as CcTRA-2, known to be necessary to establish and, most likely, to maintain female sex of C. capitata. Our study is the first de novo assembly performed for Ceratitis capitata based on Illumina NGS technology during embryogenesis and it adds novel data to the previously published C. capitata EST databases. We expect that it will be useful for a variety of applications such as gene cloning and phylogenetic analyses, as well as to advance genetic research and biotechnological applications in the Medfly and other related Tephritidae