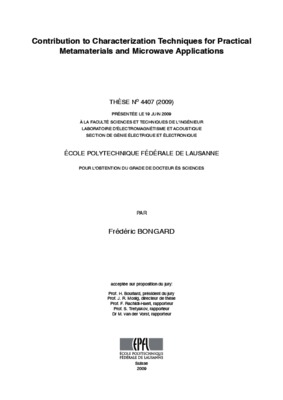 Contribution to characterization techniques for practical metamaterials and microwave applications

By Frédéric Bongard
Get PDF (28 MB)

Metamaterials (MTMs) are broadly defined as artificial composite materials specifically engineered to produce desired unusual electromagnetic properties not readily available in nature. The most interesting unusual property achievable with MTMs is probably negative refraction, which is achieved when both the permittivity and the permeability of a medium are negative. Such structures are also referred to as left-handed media (LHM). From the first evidences in the early 2000's showing that materials with a negative refractive index were indeed physically realizable, numerous entirely new devices or improvements of existing devices have been reported in the microwave and antenna fields. In this context, the objective of this thesis is to contribute to the development of new characterization techniques for practical implementations of MTMs, aiming at determining a set of relevant equivalent medium parameters describing the structure from a macroscopic point of view. For this purpose, analysis techniques were developed based on the theory of wave propagation in periodic structures, and tested on selected existing or entirely new MTM structures of the two main reported categories: arrays of resonant particles and loaded transmission lines. In the first part of the work, an improved retrieval procedure which allows the determination of equivalent dyadic permittivity and permeability of MTMs from reflection and transmission coefficients obtained for several incidences was developed and tested, thereby extending current techniques which only dealt with normal incidence. The main achievement obtained with this technique is the ability to evaluate to which extent a given MTM slab can be considered as an equivalent homogeneous medium obeying some specific constitutive relations. This technique was tested on various structures, including a novel highly isotropic artificial magnetic material which was shown to exhibit a negative permeability in the three dimensions. In a second step, MTMs based on the transmission line approach have been investigated. In this context, the theory of the so-called composite right/left-handed transmission line (CRLH TL) has been revisited, and several planar implementations of this structure in various technologies were designed and realized. Subsequently, a volumetric LHM obtained by layering several planar artificial TLs of the CRLH type was proposed and fully characterized. This volumetric structure was shown to support left-handed propagation over a quite large bandwidth, compared to other resonant LHM made of split-ring resonators and wires. We provided an extensive experimental assessment of potential applications of this structure as an exotic substrate for microstrip patch antennas. An important contribution here consisted in the assessment of the ability of such a volumetric structure based on the TL approach to behave as a material filling in this type of configurations. The next part presents an enhanced analysis technique for periodic structures which allows accurately characterizing MTMs exhibiting higher order coupling phenomena between successive cells. This technique also allows an accurate and complete description of more elaborated structures such as periodically loaded multiconductor TLs. The main idea of this technique is to model the periodic structure with an equivalent multiconductor TL, a model which provides all the parameters needed to describe the phase response (dispersion) and terminations (excitation and matching) of finite size periodic structures. In the last part, we introduced and analyzed a novel unit cell topology for the CRLH TL which employs a lattice network in place of the conventional ladder-type topology. This new CRLH TL was shown to exhibit a more wideband behaviour than its conventional counterpart, both in terms of impedance and phase. These performances were numerically and experimentally demonstrated on several practical implementations. The possibilities of using this unit cell to reduce the beam squinting in leaky-wave antennas and in series-fed arrays were highlighted. It is foreseen that this new CRLH TL can be potentially used to improve the performances of many of the well-known CRLH TL applications