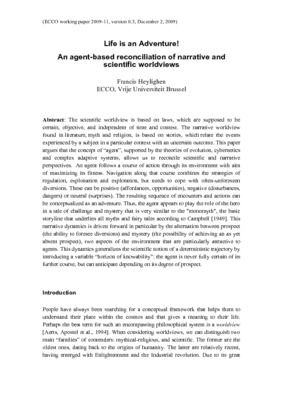 Life is an Adventure! An agent-based reconciliation of narrative and scientific worldviews\ud

By Francis Heylighen
Get PDF (549 KB)

The scientific worldview is based on laws, which are supposed to be certain, objective, and independent of time and context. The narrative worldview found in literature, myth and religion, is based on stories, which relate the events experienced by a subject in a particular context with an uncertain outcome. This paper argues that the concept of “agent”, supported by the theories of evolution, cybernetics and complex adaptive systems, allows us to reconcile scientific and narrative perspectives. An agent follows a course of action through its environment with the aim of maximizing its fitness. Navigation along that course combines the strategies of regulation, exploitation and exploration, but needs to cope with often-unforeseen diversions. These can be positive (affordances, opportunities), negative (disturbances, dangers) or neutral (surprises). The resulting sequence of encounters and actions can be conceptualized as an adventure. Thus, the agent appears to play the role of the hero in a tale of challenge and mystery that is very similar to the "monomyth", the basic storyline that underlies all myths and fairy tales according to Campbell [1949]. This narrative dynamics is driven forward in particular by the alternation between prospect (the ability to foresee diversions) and mystery (the possibility of achieving an as yet absent prospect), two aspects of the environment that are particularly attractive to agents. This dynamics generalizes the scientific notion of a deterministic trajectory by introducing a variable “horizon of knowability”: the agent is never fully certain of its further course, but can anticipate depending on its degree of prospect