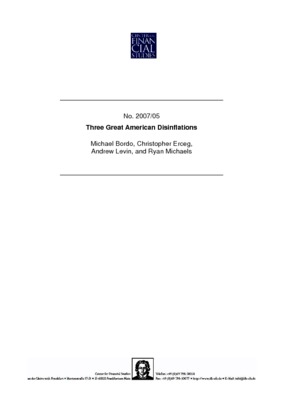 In this paper, we examine three famous episodes of deliberate deflation (or disinflation) in U.S. history, including episodes following the Civil War, World War I, and the Volcker disinflation of the early 1980s. These episodes were associated with widely divergent effects on the real economy, which we attribute both to differences in the policy actions undertaken, and to the transparency and credibility of the monetary authorities. We attempt to account for the salient features of each episode within the context of a stylized DSGE model. Our model simulations indicate how a more predictable policy of gradual deflation could have helped avoid the sharp post-WWI depression. But our analysis also suggests that the strong argument for gradualism under a transparent monetary regime becomes less persuasive if the monetary authority lacks credibility; in this case, an aggressive policy stance (as under Volcker) can play a useful signalling role by making a policy shift more apparent to private agents. JEL Classification: E31, E32, E5