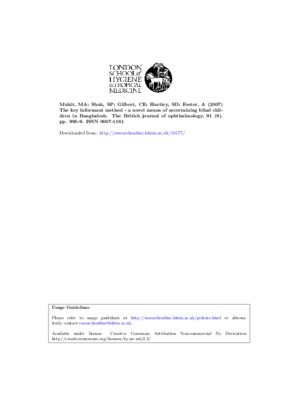 The key informant method: a novel means of ascertaining blind children in Bangladesh.

BACKGROUND: Most information on the causes of blindness has come from examining children in special education. To obtain a more representative population-based sample of children, a novel method was developed for ascertaining severe visually impaired (SVI) or blind (BL) children by training local volunteers to act as key informants (KIs). OBJECTIVE: To compare the demography and cause of blindness in children recruited by KIs with other ascertainment methods. METHOD: Children with SVI/BL were recruited in all 64 districts of Bangladesh. Three sources for case ascertainment were utilised: schools for the blind (SpEdu), community-based rehabilitation (CBR) programmes and KIs. All data were recorded using the standard WHO/PBL Eye Examination Record. RESULTS: 1935 children were recruited. Approximately 800 KIs were trained. The majority of the children were recruited by the KIs (64.3%). Children recruited by KIs were more likely to be female (odds ratio (OR) 1.6, p<0.001), of pre-school age (OR 14.1, p<0.001), from rural areas (OR 5.9, p<0.001), be multiply impaired (OR 3.1, p = 0.005) and be suffering from treatable eye diseases (OR 1.3, p = 0.005) when compared with those in SpEdu. Overall a child with an avoidable causes of SVI/BL had 40% (adjusted CI 1.1 to 1.7, p = 0.015) and 30% (CI 1.0 to 1.7, p = 0.033) higher odds of being ascertained using the KIs compared with SpEdu and CBR methods, respectively. CONCLUSION: Using this innovative approach has resulted in one of the largest studies of SVI/BL children to date. The findings indicate that KIs can recruit large numbers of children quickly, and that the children they recruit are more likely to be representative of all blind children in the community