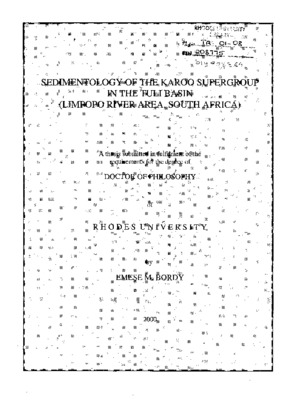 The sedimentary rocks of the Karoo Supergroup in the Tuli Basin (South Africa) consist of various terrigenous clastic and chemical deposits (parabreccias, conglo-breccias, conglomerates, sandstones, fine-grained sediments, calcretes and silc~etes). Four stratigraphic units were identified: the Basal, Middle and· Upper Units, and the CI~rens Formation. The palaeo-environmental reconstructions of the four stratigraphic units are based on evidence provided by primary sedimentary structures, palaeo-flow measurements, clast size/shape analysis, petrographic studies, palaeontological findings, borehole data and stratigraphic relations. The facies associations of the Basal Unit are interpreted as colluvial fan and low sinuosity, braid~d river channel with coal-bearing overbank and thaw-lake deposits. The interpreted depositional environment implies a cold climate, non-glacial subarctic fluvio-Iacustrine system. The current indicators of the palaeo-river system suggest flow direction from ENE to WSW. The lithologies of the Basal Unit are very similar to the deposits of the fluvial interval in the Vryheid Formation (Ecca Group) of the main Karoo Basin. There is no indubitable evidence for glacial activity (e.g. striated pavements or clasts, varvites, etc.), therefore the presence of unequivocal Dwyka Group correlatives in the Tuli Basin remains uncertain. The sedimentary structures and palaeo-current analysis indicate that the beds of the Middle Unit were deposited by an ancient river system flowing in a north-northwesterly direction. A lack of good quality exposures did not allow the reconstruction of the fluvial style, but the available data indicate a high-energy, perhaps braided fluvial system. The lack of bio- and chronostr~~igraphic control hampers precise correlation and enables only the lithocorrelation of the Middle Unit with other braided river systems either in the Beaufort Group or in the Molteno Formation of the main Karoo Basin. The depositional environment of the Upper Unit is interpreted as a low-sinuosity, ephemeral stream system with calcretes and silcretes in the dinosaur-inhabited overbank area. During the deposition of the unit, the climate was semi-arid with sparse precipitation resulting -iFlhighmagnitude, low-frequency devastating flash floods. The sediments were built out from a distant northwesterly source to the southeast. The unambiguous correspondence between the Upper Unit and the Elliot Formation (main Karoo Basin) is provided by lithological similarities and prosauropod dinosaurs remains. The palaeo-geographic picture of the Clarens Fonnation indicates a westerly windsdominated erg environment with migrating transverse dune types. The ephemeral stream deposits, fossil wood and trace fossils are only present in the lower part of the Formation, indicating that the wet-desert conditions were progressively replaced by dry-desert conditions. Based on lithological and palaeontological evidence, the Formation correlates with the Clarens Formation in the main Karoo Basin. At this stage, it remains difficult to establish the exact cause of the regional palaeo-slope changes during the deposition of the Karoo Supergroup in the Tuli Basin. It is probable that foreland system tectonics, which affected the lower part of the Supergroup (Basal Unit and Middle Unit?), were replaced by incipient continental extension and rift related tectonic movements in the Middle and Upper Units, and Clarens Formation.