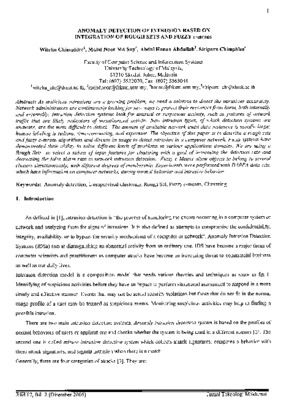 As malicious intrusions are a growing problem, we need a solution to detect the intrusions accurately. Network administrators are continuously looking for new ways to protect their resources from harm, both internally and externally. Intrusion detection systems look for unusual or suspicious activity, such as patterns of network traffic that are likely indicators of unauthorized activity. New intrusion types, of which detection systems are unaware, are the most difficult to detect. The amount of available network audit data instances is usually large; human labeling is tedious, time-consuming, and expensive. The objective of this paper is to describe a rough sets and fuzzy c-means algorithms and discuss its usage to detect intrusion in a computer network. Fuzzy systems have demonstrated their ability to solve different kinds of problems in various applications domains. We are using a Rough Sets to select a subset of input features for clustering with a goal of increasing the detection rate and decreasing the false alarm rate in network intrusion detection. Fuzzy c-Means allow objects to belong to several clusters simultaneously, with different degrees of membership. Experiments were performed with DARPA data sets, which have information on computer networks, during normal behavior and intrusive behavior