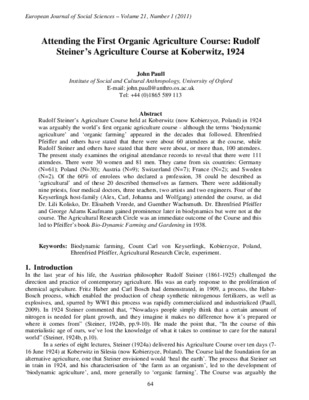 Rudolf Steiner’s Agriculture Course held at Koberwitz (now Kobierzyce, Poland) in 1924 was arguably the world’s first organic agriculture course - although the terms ‘biodynamic agriculture’ and ‘organic farming’ appeared in the decades that followed. Ehrenfried Pfeiffer and others have stated that there were about 60 attendees at the course, while Rudolf Steiner and others have stated that there were about, or more than, 100 attendees. The present study examines the original attendance records to reveal that there were 111 attendees. There were 30 women and 81 men. They came from six countries: Germany (N=61); Poland (N=30); Austria (N=9); Switzerland (N=7); France (N=2); and Sweden (N=2). Of the 60% of enrolees who declared a profession, 38 could be described as ‘agricultural’ and of these 20 described themselves as farmers. There were additionally nine priests, four medical doctors, three teachers, two artists and two engineers. Four of the Keyserlingk host-family (Alex, Carl, Johanna and Wolfgang) attended the course, as did Dr. Lili Kolisko, Dr. Elisabeth Vreede, and Guenther Wachsmuth. Dr. Ehrenfried Pfeiffer and George Adams Kaufmann gained prominence later in biodynamics but were not at the course. The Agricultural Research Circle was an immediate outcome of the Course and this led to Pfeiffer’s book 'Bio-Dynamic Farming and Gardening' in 1938