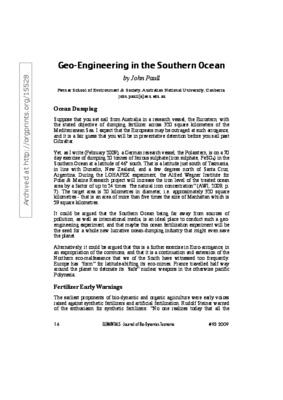 Geo-Engineering in the Southern Ocean

Ocean Dumping A German research vessel, the Polarstern, is on a 70 day exercise of dumping 20 tonnes of ferrous sulphate (iron sulphate, FeSO4) in the Southern Ocean at a latitude of 46° south. The LOHAFEX experiment of the Alfred Wegner Institute for Polar & Marine Research project will increase the iron level of the treated ocean area by a factor of up to 24 times “the natural iron concentration”. The target area is 20 kilometres in diameter, i.e. approximately 320 square kilometres. It could be argued that the Southern Ocean being far away from sources of pollution,as well as international media, is an ideal place to conduct such a geo-engineering experiment, and that maybe this ocean fertilization experiment will be the seed for a whole new lucrative ocean-dumping industry that might even save the planet.Alternatively, it could be argued that this is a further exercise in Euro-arrogance, in an expropriation of the commons, and that it is a continuation and extension of the Northern eco-malfeasance that we of the South have witnessed too frequently. Europe has “form” for latitude-shifting its eco-crimes. France travelled half way around the planet to detonate its “safe” nuclear weapons in the otherwise pacific Polynesia. The eco-credentials of artificial fertilization are poor on both land and sea. Yes we can bloom the ocean, but because we can is not an argument that we ought. Shifting the carbon “problem” from the land to the sea may be just a new version of sweeping the dirt under the mat. In this case, Europe’s carbon “dirt” under the Southern Ocean“mat”