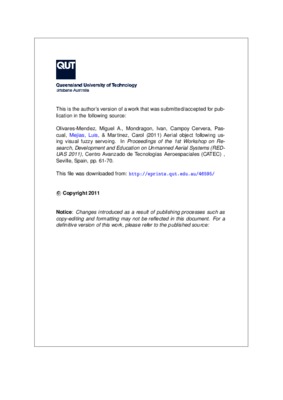 This article presents a visual servoing system to follow a 3D moving object by a Micro Unmanned Aerial Vehicle (MUAV). The presented control strategy is based only on the visual information given by an adaptive tracking method based on the colour information. A visual fuzzy system has been developed for servoing the camera situated on a rotary wing MAUV, that also considers its own dynamics. This system is focused on continuously following of an aerial moving target object, maintaining it with a fixed safe distance and centred on the image plane. The algorithm is validated on real flights on outdoors scenarios, showing the robustness of the proposed systems against winds perturbations, illumination and weather changes among others. The obtained results indicate that the proposed algorithms is suitable for complex controls task, such object following and pursuit, flying in formation, as well as their use for indoor navigatio