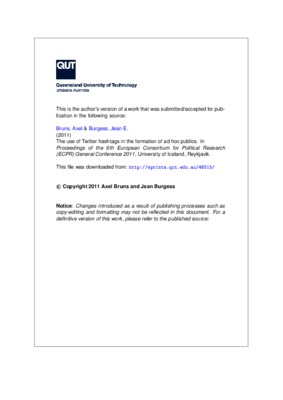 As the use of Twitter has become more commonplace throughout many nations, its role in political discussion has also increased. This has been evident in contexts ranging from general political discussion through local, state, and national elections (such as in the 2010 Australian elections) to protests and other activist mobilisation (for example in the current uprisings in Tunisia, Egypt, and Yemen, as well as in the controversy around Wikileaks). Research into the use of Twitter in such political contexts has also developed rapidly, aided by substantial advancements in quantitative and qualitative methodologies for capturing, processing, analysing, and visualising Twitter updates by large groups of users. Recent work has especially highlighted the role of the Twitter hashtag – a short keyword, prefixed with the hash symbol ‘#’ – as a means of coordinating a distributed discussion between more or less large groups of users, who do not need to be connected through existing ‘follower’ networks. Twitter hashtags – such as ‘#ausvotes’ for the 2010 Australian elections, ‘#londonriots’ for the coordination of information and political debates around the recent unrest in London, or ‘#wikileaks’ for the controversy around Wikileaks thus aid the formation of ad hoc publics around specific themes and topics. They emerge from within the Twitter community – sometimes as a result of pre-planning or quickly reached consensus, sometimes through protracted debate about what the appropriate hashtag for an event or topic should be (which may also lead to the formation of competing publics using different hashtags). Drawing on innovative methodologies for the study of Twitter content, this paper examines the use of hashtags in political debate in the context of a number of major case studies