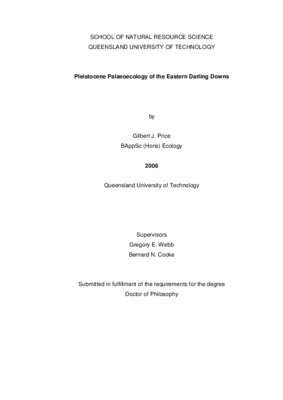 Several late Pleistocene fossil localities in the Kings Creek catchment, Darling Downs, southeastern Queensland, Australia, were examined in detail to establish an accurate, dated palaeoecological record for the region, and to test human versus climate change megafauna extinction hypotheses. Accelerator Mass Spectrometry (AMS 14C) and U/Th dating confirm that the deposits are late Pleistocene in age, but the dates obtained from the two methods are not in agreement. Fluvial depositional accumulation processes in the catchment reflect both high-energy channel and low-energy episodic overbank deposition. The most striking taphonomic observations for vertebrates in the deposits include: 1) low representation of post-cranial elements; 2) high degree of bone breakage; 3) variable abrasion but most identifiable bone elements with low to moderate degree of abrasion; 4) low rates of bone weathering; 5) low degree of carnivore bone modification; and 6) low degree of articulated or associated specimens. Collectively, those data suggest that the material was transported into the deposit from the surrounding proximal floodplain and that the assemblages reflect hydraulic sorting. A multifaceted palaeoecological investigation revealed significant habitat change between superposed assemblages of site QML796. The basal fossiliferous unit contained species that indicate the presence of a mosaic of habitats including riparian vegetation, vine thickets, scrubland, open and closed woodlands, and open grasslands during the late Pleistocene. Those woody and scrubby habitats contracted over the period of deposition so that by the time of deposition of the youngest horizon, the creek sampled a more open type environment. Sequential faunal horizons show a step-wise decrease in taxonomic diversity that cannot be explained by sampling or taphonomic bias. The decreasing diversity includes loss of some, but not all, megafauna and is consistent with a progressive local loss of megafauna in the catchment over an extended interval of time. Collectively, those data are consistent with a climatic cause of megafauna extinction, and no specific evidence was found to support human involvement in the local extinctions. Better dating of the deposits is critically important, as a secure chronology would have significant implications regarding the continent-wide extinction of the Australian megafauna