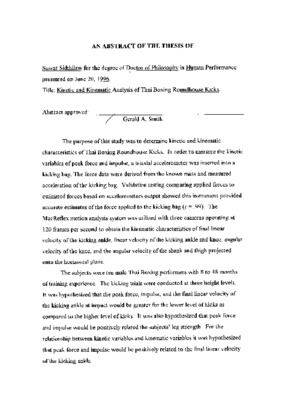 Graduation date: 1997The purpose of this study was to determine kinetic and kinematic\ud characteristics of Thai Boxing Roundhouse Kicks. In order to measure the kinetic\ud variables of peak force and impulse, a triaxial accelerometer was inserted into a\ud kicking bag. The force data were derived from the known mass and measured\ud acceleration of the kicking bag. Validation testing comparing applied forces to\ud estimated forces based on accelerometers output showed this instrument provided\ud accurate estimates of the force applied to the kicking bag (r=.99). The\ud MacReflex motion analysis system was utilized with three cameras operating at\ud 120 frames per second to obtain the kinematic characteristics of final linear\ud velocity of the kicking ankle, linear velocity of the kicking ankle and knee, angular\ud velocity of the knee, and the angular velocity of the shank and thigh projected\ud onto the horizontal plane.\ud The subjects were ten male Thai Boxing performers with 8 to 48 months\ud of training experience. The kicking trials were conducted at three height levels.\ud It was hypothesized that the peak force, impulse, and the final linear velocity of\ud the kicking ankle at impact would be greater for the lower level of kicks as\ud compared to the higher level of kicks. It was also hypothesized that peak force\ud and impulse would be positively related the subjects' leg strength. For the\ud relationship between kinetic variables and kinematic variables it was hypothesized\ud that peak force and impulse would be positively related to the final linear velocity\ud of the kicking ankle.\ud In comparing the roundhouse kick at different height levels the middle\ud level kick generated the greatest peak force and impulse, while the high level kick\ud involved the least force and impulse. The amount of peak force and impulse were\ud directly related to the final velocity of the ankle (r=.86, and r=.79 respectively),\ud but they were not significantly related to the leg strength. This study found that\ud the Thai Boxing roundhouse kick can easily generate enough force to cause\ud neurological impairment, skull fractures, facial bone fractures, and rib fractures.\ud These results suggest that there is a greater need for regulations protecting the\ud competitors in Thai Boxing