The Informal Recycler in Shanghai: Mobility, Migration and Citizenship

As social and economic realities shift in China\u27s post-reform era, increasing instability for the country\u27s hundreds of millions of migrant workers. The recent, dramatic growth of informal markets for recyclable waste represents a valuable opportunity for geographers to reinterpret how migrant labor is transforming urban identities. This thesis argues for a grounded study of informal recycling in Shanghai, now the world\u27s largest receiving port for recyclables as well as hundreds of thousands of domestic migrants. Perhaps more than any other class in the Chinese labor forces, migrant workers participating in informal urban markets face myriad social and economic challenges. Yet despite conflicting discourses on the value and culture of waste, participation in informal recycling offers a constitutive social role, in contrast to conventional ideas of marginalized urban subsistence activity 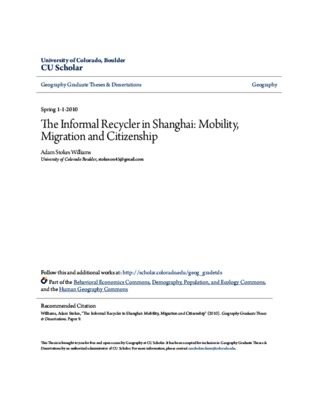