In 2015 the World Health Organization (WHO) determined that tuberculosis (TB) was the world’s most fatal infectious disease. Furthermore, Doctors Without Boarders (DWOB) published reports indicating that incidents of multi-drug resistant strains of TB (MDR-TB) infection have become rampant in resource-limited parts of the world. DWOB attributes the rapid increase in MDR-TB in part to a lack of accurate diagnostic techniques. The Feldheim group has been working towards developing aptamers to function as capture reagents in a new diagnostic platform for the detection of TB biomarkers in patient urine. Utilizing the SELEX process, an evolved pool of modified DNA aptamers were generated for the protein TB biomarker, MT2462, which is found in the urine of patients with active TB disease. Analysis of the evolved aptamer pool has revealed several aptamer sequences that could function as binders to MT2462. Specifically, an aptamer termed SEQ1, was selected for analysis. Determination of the aptamer affinity and specificity of SEQ1 for MT2462 will then create the potential for this sequence to be utilized in the development of a new diagnostic for TB 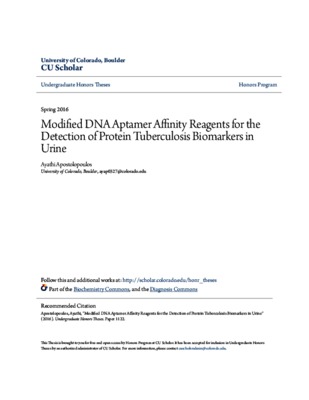