This paper focuses on the way that United Kingdom Independence Party (UKIP) attempted to communicate its policies and messages about the topic of renewable energy during 2013-14. Renewable energy is a fruitful topic to consider as it has a strategic importance in the discussion of the future of the UK while it raises questions about the role of science in politics, the tensions between the value of particular, mostly rural, places. The emergent theme from the analysis was not only rurality and renewable energy but the connection of the latter issue to scepticism about climate change. With the emergence of new forms of media, in particular, social media, the means of representation are more closely in the control of political actors. The immediacy and frequency of communication through platforms such as Twitter has added another strand of published materials to the more familiar pamphlets, reports, and manifestos. This paper uses the novel approach of the qualitative analyses the social media posts of one key UKIP representative and a sample of the linked materials, in tandem with newspaper coverage, to reveal the key themes in the UKIP discourse 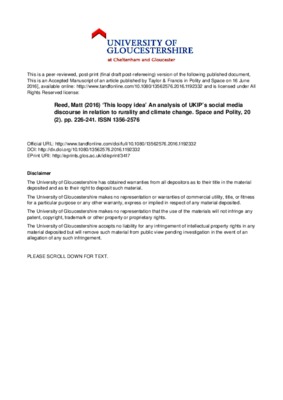 This paper was published in University of Gloucestershire Research Repository .