Plasma sheaths are present wherever a plasma interacts with a surface. In many practical situations, such as in nuclear fusion devices, the sheath is interspersed with an external magnetic field that intersects the surface at some angle. This thesis focuses on the behaviour of magnetized RF sheaths in an RF-CCP discharge since similar RF processes occur near RF antennas in fusion devices. Sheaths represent one of the oldest problems in plasma physics. While there is an abundance of research on sheaths, it is mainly focused on the un-magnetized case or that with a transverse magnetic field. There is less research on the behaviour of sheaths in oblique magnetic fields. RF sheaths are thought to be the cause of numerous, unwanted, deleterious interactions in tokamaks, thereby limiting the performance of RF antennas. Understanding their behaviour is crucial for nuclear fusion research while also having applications in the plasma processing industry where magnetic fields are often employed to enhance reactor performance. The sheath influences particle and energy fluxes to the surface and can ultimately affect the behaviour of the overall plasma. As a whole, knowledge of sheaths is vital to the understanding of plasma-surface interactions. We used a 1d3v electrostatic particle-in-cell (PIC) code, MagPIC, developed at DCU, to conduct our research. A kinetic study of the sheath is essential in order to capture the small scale kinetic and non-local effects. We have found a magnetized electron series resonance(MESR) can be induced in the presence of an oblique magnetic field. The occurrence of such a resonance is sensitive to the magnetic field angle and occurs only for an extremely narrow range of angles. We have demonstrated that during resonance the ion flux and energy can become decoupled. Upon optimization of parameters, this may provide an alternative method to realise independent control of ion properties, which may lead to applications in plasma processing. We also investigated the applicability of simple sheath models in describing the magnetized situation. From a comparison of our simulation results with a simple RF sheath model that ignores the magnetic field, it was found that such simple models can offer an adequate description of the magnetized situation for an oblique magnetic field. A brief comparison between 1D simulations and experimental results provided by the group in the Institute of Plasma Research (IPR), Gandhinagar, Gujarat, India was also considered. From which we recommend a 2D investigation is needed 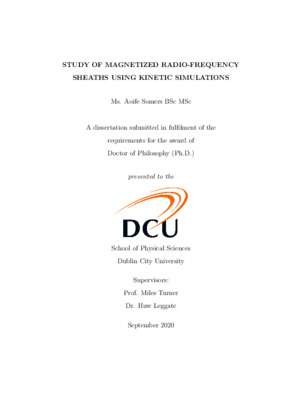 This paper was published in DCU Online Research Access Service.