Chondrichthyans play an important ecological role, they tend to be high in the food web being very often predators at the top of marine food webs (Cortés, 1999; Ebert e Bizzarro, 2007). Sharks and rays appear to be particularly vulnerable to over-exploitation because of their K-selected life-history strategy (Cailliet et al., 2005). Therefore, given that the consequences of their intense exploitation could be very dangerous, many authors have stressed their vulnerability (Bonfil, 1994; Cahmi et al., 1998; Stevens et al., 2000; Fowler & Cavanagh, 2005) and the importance of their protection (Fowler & Cavanagh, 2005), unfortunately not so effective (Cavanagh e Gibson, 2004). Currently, many efforts are made in order to clarify and to better understand the functioning of marine ecosystems, for the purpose of an enhanced management. An exhaustive study of feeding habits and trophic interactions between species is required to obtain this information (Stevens et al., 2005), nevertheless data from literature regard a limited number of species. All that has provided the opportunity to undertake the analysis of feeding habits and trophic relationships between all the Chondrichthyans caught in Sardinian waters by trawler, in order to provide an overall view about the interactions that rule the funtcioning of marine ecosystems and energetic exchanges. Moreover, for the purpose of a better management, we have assessed the fishing impact on this important taxonomic group. All of these aims were obtained through stomach content analysis of all the species caught in the course of three years of study, taking into account some important factors as sex, size and depth that could influence the diet. Intraspecific and interspecific niche overlap, Trophic index and its trend were also determined in order to assess state of exploitation of Chondrichthyans. We analyzed the diet of 27 species M. punctulatus and D. nidarosiensis are new records for Sardinian waters and Mediterranean Sea respectively.,Among these, 14 species were caught occasionally or presented a high percentage of empty stomachs, so it was possible to provide only a preys list. Generally, some similarities could be noticed between all the species. The niche breadth was larger in the specimens caught at the deepest strata, likely due to their adaptation to oligotrophic conditions, characteristic of the deepest habitats. With variable proportions species prey on Crustaceans, Teleosts and Cephalopods, and minorly on Chondrichthyans too. Two distinct way of feeding, deeply influenced by body morphology. Batoids prey mainly on benthopelagic and benthic organisms, while shark-like species prefer nectonic preys or organisms more swimming prone. A few number of preys, characterized by a great abundance in the habitats that inhabit, represent the core of the diet of all the analyzed species. Mysids, like Gastrosaccus sanctus and Lophogaster typicus, Brachyurans of the genus Liocarcinus sp, Natantians as Solenocera membranacea, Pasiphaea multidentata and P. sivado, the euphausiid Meganyctiphanes norvegica and the Cefalopods belonging to the family Sepiolidae (mainly Heteroteuthis dispar) are the most representative. Moreover, teleostes like Gymnammodytes cicerelus and Glossanodon leioglossus are exploited by some species. Ontogenetic variation in feeding habits were noticed: in general small specimens eat small preys, especially benthic ones (crustaceans, small teleosts and sepiolids). With the growth preys bigger and more swimming prone become more important in the diet of all the species. Similarly, trophic index values increase with the growth, maintaining low levels of competition between species and improving survival rate of juveniles. Speaking generally, trophic level increase for species that prefer pelagic preys. No differences in trophic spectrum were observed among sexes that, in fact, are characterized by a high value of niche overlap. The analysis of the diet in function of depth does not show any significant difference, except for species that present a different bathymetric segregation. Niche overlaps analysis points out a greater interspecific competition between specimens of the deepest strata. These environments are characterized by oligotrophic conditions that lead to an intensive exploitation of a limited number of preys, thus maximizing the overlap between diets. Marine trophic index, estimated for MEDITS target species from 1994 to 2010, showed an increasing trend, probably related to the change in the Sardinian fishing fleet occurred at the beginning of the nineties. Marine trophic index for Chondrichthyans remained stable until 2001, then oscillated and, finally, tended do decrease slightly. The study allowed to discover a complex web of trophic interactions. Some results disagree with those reported in literature, indicating the existence of a big variety, also within the same species, related to geographical differences. More studies would be necessary to extend knowledge about the interactions that control the functioning of the ecosystems and to prevent the decline of this taxon, avoiding the negative effects of its loss. The final aim will be to provide appropriate management measures very soon, in order to ensure the protection of Chondrichthyans 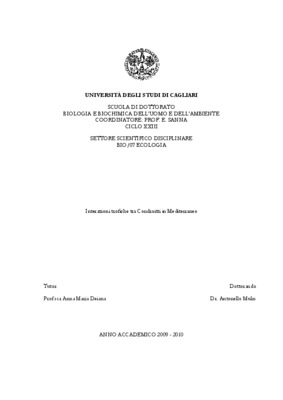 This paper was published in UniCA Eprints.