After the acknowledgement of lndonesians sovereignty, Surabaya was back to be governed by lndonesian people. The new government faced big problem dealing with Surabaya city that is in chaotic situation after the war. The population increased rapidly, and most of the people become poor. There were a lot of homeless people after their house ruined by bombing or their houses replaced by another people when they were still on refugees. The amount of new coming people from outside places in Surabaya was also increased, adding population of poor people in the city. The lack of housing had caused poor people in Surabaya to acquisised empty spaces in the city to build setllements which most of them were only small huts, on the roadside, the riverside or any other empty places. The municipality government that did not solved the messing situation later forced to involve the military. This article is the result of the research using historical method, based on archive and contemporary written documentary. Most of the sources used in this article are taken from newspapers published in Surabaya in the 50’s, and the interview. The main thesis of this articles is that the military involvement in controlling the poor people is contra productive and bring negative impacts for both side 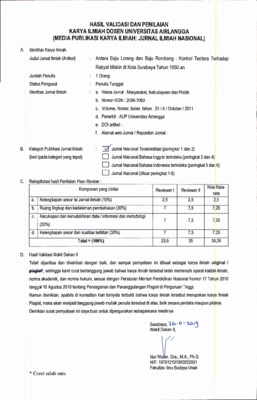 This paper was published in Universitas Airlangga Repository.