The one Takahama Kyoshi who knows as a haiku poet has begun to serialize in 1911 “Tokyo Nichinichi Newspapers” and “Osaka Mainichi Newspapers” is “Joseon”. The interest in the country to an area which has just consisted of merger of Japan and the Republic of Korea in a colony in time as 1 year seems in 1911, to have been also rising. Then entering Korea directly and based on experiencing, Kyoshi wrote “Joseon”. But 70 times of uehen ends, and serialization of “Osaka Mainichi Newspapers” will be suspension, and shitahen starts with only “Tokyo Nichinichi Newspapers”. Its separate volume is published in the next year, but the whole change is eliminated substantially big with the contents of newspaper serialization. And in the “complete series” issued by Kyoshi 100 year born commemoration, “Joseon,” it itself disappears.It’s the purpose of this paper to consider what kind of value does it have today, and how a novel called “Joseon” via the uproarious process like the above is placed in Japan short distance current literature. The thing corrected by “Joseon” much can find a factor from a change in the Korean look Kyoshi had then and a change in the posture to the genre as the novel. The Korea which has just become a colony was the place which can be reclaimed for Japanese and was also the place a life changes. But if that goes to Korea directly by an idea from a Japanese point of view, that may change. Kyoshi experienced that directly. Such circumstances seemed to have influenced like the contents, but formally, I also had the one as the experiment of “sketch” Kyoshi tried to try. The feeling that I’d like to make a sketch achieved seems a try to the sketch which has started from Masaoka Shiki was the process connecting with Kyoshi, and excited about a novel. Kyoshi may be able to feel a place as the Korea which attracted attention from people, too attractively as its suitable material.But the Korea Kyoshi experienced while traveling directly was different from the Korea which was thinking vaguely in Japan and was the one which is to the extent it can also be said that the form of the Japanese who lives is rather cruel, there. It’s possible to peep into however different whether the Korea which was thinking in Japan and the Korea experienced directly be through “Joseon”. But the look from the Korean who took the country where he lives there away in a moment is very little in Kyoshi’s “Joseon”. It tried to enrich in a sketching novel, not a political drama, “While being seen.” “Joseon” was so going to draw Korea of “truth”, and then was the result “Joseon” wasn’t told about any more 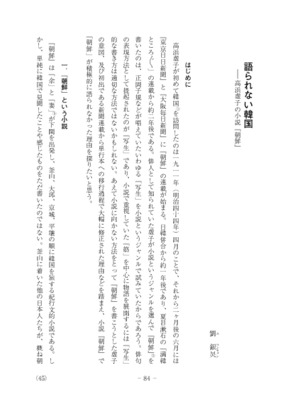