“Climate, Belief, and Chronic Illness” was first run in the Taiwan Jihou in January of 1943. It was the fifth work of Zhou Jin Bo (1920 -1996), known as a “Koumin Writer”, and, as opposed to his premier works “Suigan” and “Shiganhei”, with the theme of regressing from a belief in Shinto to the so-called “superstitions” of native Taiwanese beliefs shows a lightening in the degree of Japanization. As the “chronic illness” (pains down the leg) of the hero cannot overcome the rainy “climate” of northern Taiwan, neither did Japanese Shinto, which the hero hoped could heal his “chronic illness” through faith, overcome the culture and values behind ethnic Taiwanese beliefs. The frustrations of the hero are woven one by one into the ethnic Taiwanese practices of his wife, expressing brilliantly how the man\u27s emotions were wrenched in the space between Japan and Taiwan. Through examining “Climate, Belief, and Chronic Illness”, and, after, clearly illustrating the differences between Taiwanese and Japanese culture, I would like to attempt to look at the unreasonableness of the peoples of the old colonies having Japanese culture thrust upon them beyond merely the framework of “differences in culture”, as well as the change in Zhou Jin Bo’s writing style.This work looks not only at the clash of Taiwanese and Japanese culture, but also shows the limits of the criticism up to this point regarding Zhou Jin Bo as an author. That is, surprisingly, of the works of Zhou Jin Bo, living as someone denied by a singular ideology, only his first, “Suigan”, and second, “Shiganhei”, have been looked at, and, because of their themes, have become the base of his criticism. This is most likely because his development as an author, that being the changes in his powers of observation and state of mind, have been ignored. To press the matter further, researchers still are of the tendency of judging things based on a clear bi-polar method, where “resistors of the authorities are good, sympathizers are bad”. It is believed that contradictions in literary research come from this 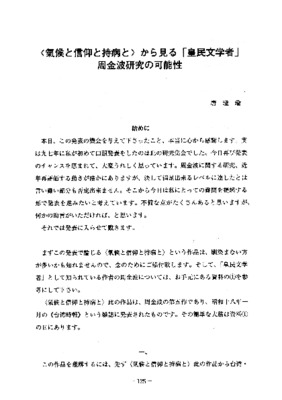