Science and art are often taken as complete opposites. Even further apart than two genres, they are two disciplines, and most academic institutions house them in separate locations-even in separate campuses. But I maintain the two are (and throughout history always have been) fundamentally entwined.Science itself is diverse. Studies into the nature and appearance of phenomena cannot but relate to the ways in which people then represent those phenomena in pictures. Clearer still is the case of the science of optics, which addresses the way in which we see, and provides instruments to improve vision.My talk will focus on optical science in the eighteenth century, and suggest some ways in which it relates to Edo period art, and also to Edo literature 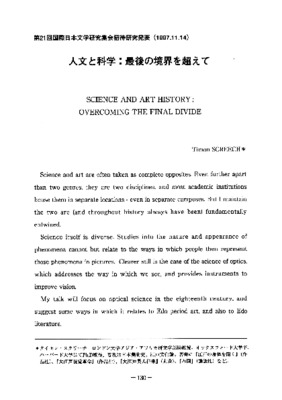