Miyazawa Kenji\u27s novel "Kaze no Matasaburo" is read and taught widely today, and has earned recognition as a classic depiction of youth. Less well known is the fact that the novel was not released before Miyazawa\u27s death, as he judged it unfinished, and only during wartime, years later, did the book finally gain acceptance. The success of the screen version of the novel released by Nikkatsu Productions in 1940 helped to spread the name of the hitherto little-known Miyazawa. Following his death in 1933, there had been signs that some people attempted to praise Miyazawa\u27s works, but it was concentrated on his poetry. In 1939, Hada Books published "Kaze no Matasaburo" as a children\u27s book, but it attracted little attention. Looking at the list of works for children (1941) in the National Publications Cultural Children\u27s Section, we see that, for instance, Tsubota Joji\u27s "Kaze no Naka no Kodomo" places 28th, while Miyazawa languishes at 190th. However, with the acceptance of the screen version, "Kaze no Matasaburo" received far more praise than the Tsubota work. The sensational movie was subsequently endorsed by the Department of Education, and a variety of recorded versions were marketed.An examination of the contemporary state of educational cinema confirms that the movie was played around the country. Thus, the Nikkatsu movie may be viewed as the starting point of the work\u27s acceptance. As for the screen adaptation of the written text, what one notices are statements relating to colonization, of rather, the "South Seas".In this paper, I hope to make clear that the movie "Kaze no Matasaburo", which was essentially "overlaid" onto the original text, won a favorable response largely by identifying with Japan\u27s wartime colonialism 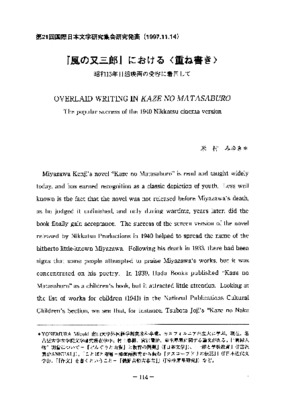