Moral Philosophy and the ‘Ethical Turn’ in Anthropology

Moral philosophy continues to be enriched by an ongoing empirical turn,mainly through contributions from neuroscience, biology, and psychology. Thusfar, cultural anthropology has largely been missing. A recent and rapidly growing‘ethical turn’ within cultural anthropologynow explicitly and systematically studiesmorality. This research report aims to introduce to an audience in moral philosophyseveral notable works within the ethical turn. It does so by critically discussing theethical turn’s contributions to four topics: the definition of morality, the nature ofmoral change and progress, the truth of moral relativism, and attempts to debunkmorality. The ethical turn uncovers a richer picture of moral phenomena on theintersubjective level, one akin to a virtue theoretic focus on moral character, withstriking similarities of moral phenomena across cultures. Perennial debates are notsettled but the ethical turn strengthens moral philosophy’s empirical turn and itrewards serious attention from philosophers 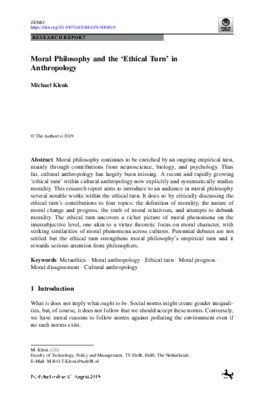