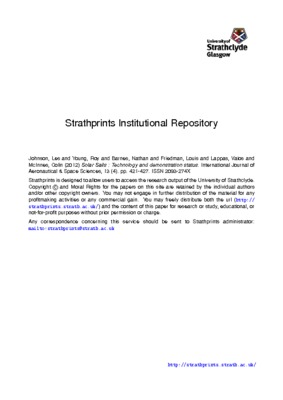 Solar Sail propulsion has been validated in space (IKAROS, 2012) and soon several more solar-sail propelled spacecraft will be flown. Using sunlight for spacecraft propulsion is not a new idea. First proposed by Frederick Tsander and Konstantin Tsiolkovsky in the 1920's, NASA's Echo 1 balloon, launched in 1960, was the first spacecraft for which the effects of solar photon pressure were measured. Solar sails reflect sunlight to achieve thrust, thus eliminating the need for costly and often very-heavy fuel. Such "propellantless" propulsion will enable whole new classes of space science and exploration missions previously not considered possible due to the propulsive-intense maneouvers and operations required