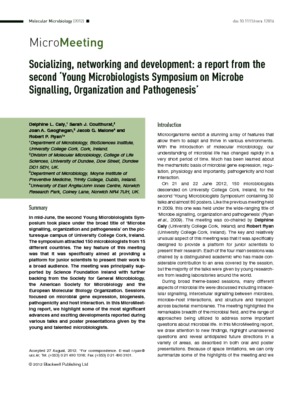 Socializing, networking and development: a report from the second ‘Young Microbiologists Symposium on Microbe Signalling, Organization and Pathogenesis’

In mid-June, the second Young Microbiologists Symposium took place under the broad title of ‘Microbe signalling, organization and pathogenesis’ on the picturesque campus of University College Cork, Ireland. The symposium attracted 150 microbiologists from 15 different countries. The key feature of this meeting was that it was specifically aimed at providing a platform for junior scientists to present their work to a broad audience. The meeting was principally supported by Science Foundation Ireland with further backing from the Society for General Microbiology, the American Society for Microbiology and the European Molecular Biology Organization. Sessions focused on microbial gene expression, biogenesis, pathogenicity and host interaction. In this MicroMeeting report, we highlight some of the most significant advances and exciting developments reported during various talks and poster presentations given by the young and talented microbiologists