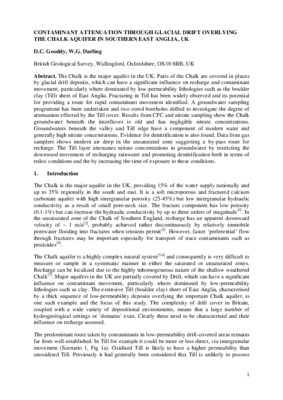 The Chalk is the major aquifer in the UK. Parts of the Chalk are covered in places by glacial drift deposits, which can have a significant influence on recharge and contaminant movement, particularly where dominated by low-permeability lithologies such as the boulder clay (Till) sheet of East Anglia. Fracturing in Till has been widely observed and its potential for providing a route for rapid contaminant movement identified. A groundwater sampling programme has been undertaken and two cored boreholes drilled to investigate the degree of attenuation effected by the Till cover. Results from CFC and nitrate sampling show the Chalk groundwater beneath the interfluves is old and has negligible nitrate concentrations. Groundwaters beneath the valley and Till edge have a component of modern water and generally high nitrate concentrations. Evidence for denitrification is also found. Data from gas samplers shows modern air deep in the unsaturated zone suggesting a by-pass route for recharge. The Till layer attenuates nitrate concentrations in groundwater by restricting the downward movement of recharging rainwater and promoting denitrification both in terms of redox conditions and by increasing the time of exposure to these conditions