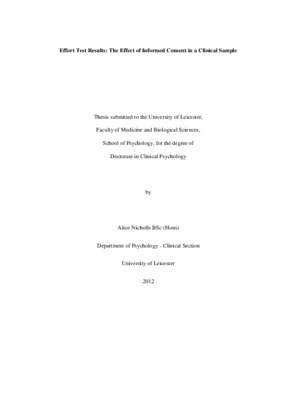 Effort Test Results: The Effect of Informed Consent in a Clinical Sample

By Alice Nicholls
Get PDF (2 MB)

Effort or Symptom Validity Tests (SVTs) are used during neuropsychological assessment to assess for negative response bias. SVT failure can be used as evidence that other test results are invalid and to support a diagnosis of malingering. The positive predictive accuracy of a SVT is dependent on its sensitivity, specificity and the base rate of malingering within the population sampled. The British Psychological Society (BPS, 2009) advises that all clinical patients should be assessed for effort using a SVT. However, there is no available data on the likely base rates of malingering within a UK clinical sample. Furthermore, despite test manual instructions, the BPS also advises that examinees should be informed they will be assessed for effort, potentially invalidating test results. A systematic literature review was conducted to ascertain what is currently known about the base rates of malingering. Studies were only included if they enabled the application of the Slick, Sherman and Iverson (1999) criteria for definite or probable malingering to their sample. Four North American Studies yielded 503 litigating, traumatic brain injured participants of which 24.55% were identified as either probably or definitely malingering. This figure was significantly lower than previous estimates, which have suggested the base rate of malingering may be as high as 40% (Larabee, 2003). In order to investigate whether informing people presenting for a neuropsychological assessment that they would be tested for effort affects their SVT results a multi-site experimental design was employed. Participants were randomly assigned to either informed or uninformed conditions and administered a battery of neuropsychological tests including the Test of Memory Malingering (Tombaugh, 1996). Practical difficulties resulted in small sample size and insufficient statistical power to either accept or reject the null hypothesis. Further data collection, research opportunities and clinical implications are discussed