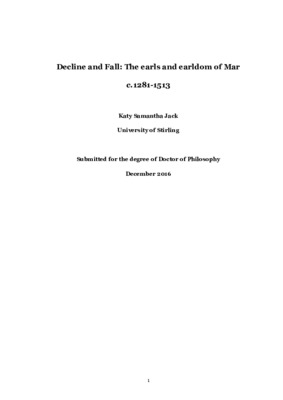 The subject of this study is the earls and earldom of Mar c.1281-1513. Chapter 1 provides a description and analysis of the internal structure and administration of Mar, detailing the lands contained within each of Mar’s lordships and their respective caputs. This is supplemented by a breakdown of the Mar rental yields between 1435 and 1565, sourced from various accounts contained within the Exchequer Rolls. Chapter 2 charts the political development of the early earls and earldom of Mar between c.1281 and 1388. It is argued that the earldom suffered from extended periods of absentee lordship, instigating a decline in the earldom’s fortunes and importance, only interrupted by a brief revival between 1388 and 1435. Chapter 3 is concerned with the fortunes of Mar under the control of Mar’s only female countess to rule in her own right, Isabella Douglas, sister of James Douglas, 2nd earl of Douglas and Mar. The chapter draws particular attention to her attempts to consolidate her authority in the wake of debates surrounding the Douglas inheritance after 1388, and her response to Albany Stewart interference in her earldom between 1402 and 1404. In doing so, it presents an alternative interpretation of Countess Isabella’s role in the coup of 1404 led by Alexander Stewart, son of Alexander Stewart lord of Badenoch. This chapter also explores the issue of female authority, and argues that the proactive policies of Countess Isabella have been largely ignored in the historiography of the period. Chapter 4 provides an assessment of the earls and earldom of Mar from 1435-1513. Building on the examination of the career of Alexander Stewart, earl of Mar contained in chapter 3, this chapter explores the political ramifications of his death and the attempts by both the Erskines and the Lyles to secure their Mar inheritance. Their decision to court the Forbes family in a bid to secure local support for their claims highlights the hitherto underemphasized importance of this family as the font of local authority, and draws attention to the effect of Stewart’s death on the exercise of local lordship in Mar. Taken together, these four chapters will challenge current perceptions of Mar’s geographical development and political decline between c.1281 and 1513