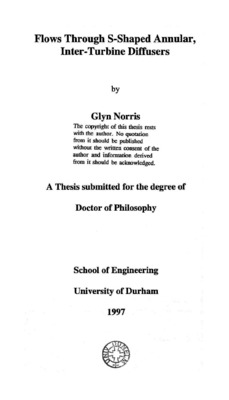 Inter-turbine diffusers or swan neck ducts (SND's) provide flow continuity between the H.P. and L.P. turbine, which with diffusing of the flow allow; greater stage efficiencies to be achieved as a consequence of reducing both the stage loading and flow coefficient of the L.P. turbine. This thesis presents an experimental and computational investigation into the local flow development and overall performance of two different severity diffusing annular sshaped ducts, with the same overall diffusion ratio of 1.5, in order to validate the CFD code M.E.F.P. The first less severe diffusing duct was used to investigate the effects of inlet swirl on the duct performance. It was found that at an optimum swirl angle of 15 degrees, the duct total pressure loss coefficient was approximately half the value at 0 or 30 degrees swirl. The second more severely diffusing duct had simple symmetrical aerofoil struts added, which simulated struts required in real inter-turbine diffusers to support inner shafts and supply vital engine services. The total pressure loss developed by the 30% shorter duct was 15% greater that of the longer duct, and when struts were added to the second duct the loss almost doubled. These increases were attributed to gradually worsening casing surface flow separations which also acted to reduce the overall static pressure recovery of the ducts as their losses increased. The computational investigations were made on the more severe duct with and without struts. The code, Moore's Elliptic Flow Solver (M.E.F.P) which used a mixing length model, predicted flow separation in the strutted duct case albeit in slightly the wrong position, however, it failed to predict any secondary flow for the unstrutted case and hence correlated worse with the measured results. This was also true of the results predicted by a version of Dawes BTOB3D