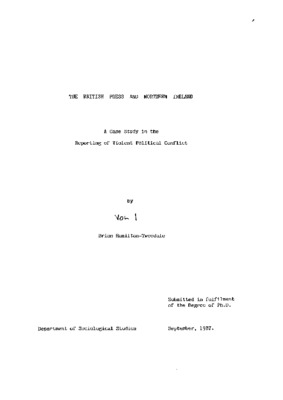 The British press and Northern Ireland : a case study in the reporting of violent political conflict.

By Brian Hamilton-Tweedale
Get PDF (10 MB)

The study presented here focuses on the treatment accorded to Northern Ireland by the British press since 1969. It argues that the press has failed to provide the public with an impartial or meaningful account of the conflict in the North, and explores some of the factors that have contributed to this failure. Chapter One outlines the primary functions that have been ascribed to journalists and the press in democratic society, and provides a standard against which press performance may be judged. Chapter Two evaluates a range of commentaries on the British media's reporting of Northern Ireland from Partition to the present day. The study moves on to examine the debate over the media's representation of "terrorism" and assesses the consequences of this debate for the British media's reporting of Northern Ireland. Chapter Four provides an account of the research methods employed in the study and reflects on some of the practical problems encountered during the course of the fieldwork. Chapter Five presents the findings of a content analysis of the coverage accorded to civilian assassinations by seven British and two Northern Irish newspapers during a five week period in 1972. Chapter Six outlines the development of the information services operated by the army and the police, and describes how these forces have used their strategic position as a news source to gain the edge in the propaganda war. Picking up on some of the themes and issues raised in previous chapters, Chapter Seven focuses on those involved in the production of news and presents the findings of a series of interviews undertaken with journalists in Belfast and London. The final chapter summarises the principal findings of the study and reflects on the prospects of a reversal in the present approach to the reporting of Northern Ireland by the British press