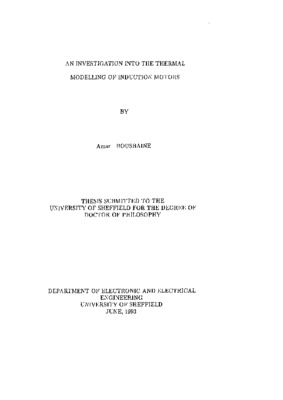 An investigation into the thermal modelling of induction motors.

Electric motors are the ubiquitous workhorses of the industry, working a in wide range of conditions and applications. Modern motors, designed to exact ratings using new materials improved manufacturing techniques, are now much smaller but have higher loadings. They are being operated much nearer to the point of overload then ever before. To ensure a satisfactory life span for the motor, temperature rise must be limited to safe values. A lumped parameter thermal model has been developed, which allows rapid and accurate estimation of the temperature distribution in a machine. The lumped parameter thermal model depends on the accurate knowledge of the thermal coefficients and more importantly the loss distribution. Hence the temperature time technique was implemented to investigate the iron loss density distribution. Experimental results are discussed and loss density information throughout the volume of the machine was generated. A novel method of determining the thermal coefficients employed in the heat flow equation was investigated, using the thermal lumped parameter model of a machine. Finally a 2-D finite element method was used to corroborate, or otherwise, the use of the lumped thermal network model