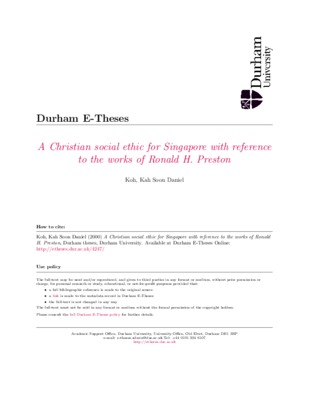 A Christian social ethic for Singapore with reference to the works of Ronald H. Preston

This thesis proposes a contextual Christian social ethic for a plural Singapore where Christianity, as a late arrival in East and Southeast Asia, is still regarded by most Asians as a foreign religion, mainly because of its association with past colonial exploits and present Euro-North American value-systems. Our thesis begins with an historical overview of Singapore from its founding as a British colony to its present position as an independent prosperous republic. Drawing on two failed attempts at Christian social engagement in post- colonial Singapore as examples, we argue against uncritical adoption of any social ethical model which is not culture-sensitive to the peculiar contextual concerns of that city-state. We show that an appropriate and credible Christian social ethic for Singapore can be found, not so much in Liberation Theologies or Ecclesiological Ethics, though they have rightly attracted a lot of attention in recent years, but rather in the social theology of Ronald. Preston and the tradition he represents. Preston's social theology, informed very much by a doctrine of creation, recognises God's grace at work in the life of all people and social structures. It encourages and facilitates constructive Christian social engagement in the political arena and the economic sphere where Christians, as members of overlapping communities, live and work with people of other faiths and those with no religious affiliation. When critically adapted and appropriately supplemented by other theological and philosophical materials in areas where we find deficiencies, Preston's social theology provides the congenial theological resources which can be used to frame a contextual Christian social ethic to meet the multi-faceted challenges of a plural, post-colonial Singapore