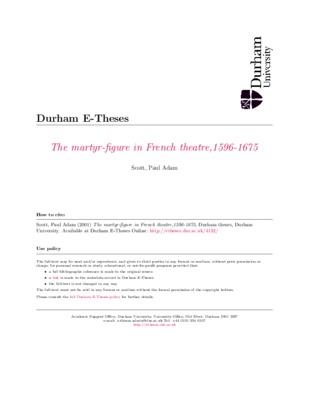 This doctoral project is the first comprehensive study of plays about Christian martyrdom on the French stage from 1596 to 1675.1 have compiled a corpus of such tragedies (Appendix). In Chapter One, I argue that such plays should be treated as a characteristic tragic sub-genre, distinct from other forms of religious plays. I also examine the background to the appearance of the martyr-play, in particular the exaltation of martyrdom in both Protestant and Catholic communities in the sixteenth and seventeenth centuries, as well as other artistic representations of the martyr-hero. Religious literature has often been studied in the light of theological controversy. Since a martyr-play deals with an individual resisting lawful authority, I have concentrated on looking at plays from a political aspect: the depiction of revolt. Accordingly, at the end of Chapter One, I consider how the French king was widely portrayed under the traits of a Roman emperor in popular iconography, demonstrating that this allegory was so widespread, that an audience viewing an emperor on stage would see a link with their own monarch. In Chapters Two, Three and Four, I examine the extant tragedies from the period, with a particular emphasis on how authors treat the question of obedience and the martyr's struggle. Writers with court connections mellow and neutralise the martyr's refusal to obey, notably Comeille and Rotrou. Other dramatists emphasise and highlight the element of individual conscience, particularly La Serre and Desfontaines. The martyr-play peaks during the 1640s and early 1650s, that is to say during a time of civil war, and I believe that the play was a vehicle through which authors could express their discontent with contemporary authority, or even use the example of the martyr as a deterrent to active revolt (Gaspard Olivier is the most striking case).In Chapter Five, I explore the inherent ambivalence of the martyr, and look at the tragedies from the perspective of suicide and the portrayal of gender. I conclude that the martyr is always an ambiguous model, and that this is reflected in the French stage portrayals