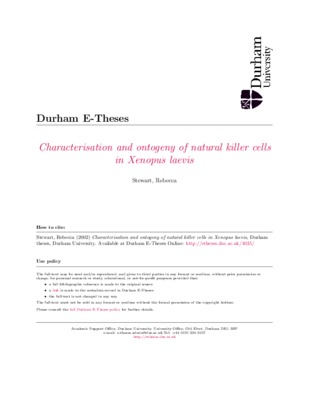 Characterisation and ontogeny of natural killer cells in Xenopus laevis

By Rebecca Stewart
Get PDF (8 MB)

The initial aim of the work described in this Thesis was to investigate the lymphoid organ distribution, phenotype and function of the lymphocyte population identified by candidate anti-Xenopus natural killer (NK) cell monoclonal antibodies (mAb's). Since removal of the thymus gland early in larval life (thymectomy) results in the eradication of T-cells and subsequent increase in the proportion of candidate NK cells, thymectomised (Tx) Xenopus were integral in the study of this subset of lymphocytes. Phenotypic and functional studies respectively demonstrated that mAb-defined candidate NK cells do not belong to the B- or T-cell lineage and display cytotoxic activity towards MHC class-Ia-deficient tumour target cells, strengthening the contention that these cells represent the NK subset in Xenopus. The ontogeny of NK cells was investigated in relation to the emergence of the NK cell inhibitory ligand, MHC class-L Splenic NK cells were found to emerge in 6-7 week-old larvae (stage 56-58), which is ≈5 weeks after T- and B-cells become detectable, and some 2 weeks after MHC-Ia is first detected. However, these cells do not appear to be functionally competent until 6 months of age. The expression and ontogeny of recently cloned β2m (the molecule essential for MHC class-I expression) was also briefly investigated. β2m (both RNA and protein) was detectable in all adult tissues and cell lines, even class-I-deficient tumour cells; β2m transcripts were found in 5 week-old larvae that lack MHC class-I. The emergence of NK antigen on a population of T-cells following in vitro stimulation of splenocytes with PMA and calcium ionophore presented the opportunity to biochemically characterise (through immunoprecipitation) the mAb-defined NK antigen. Proteins precipitated using the anti-NK mAb were either surface labelled with biotin, or metabolically labelled with (^35)S. Both techniques resulted in the detection of a protein 55kDa in size