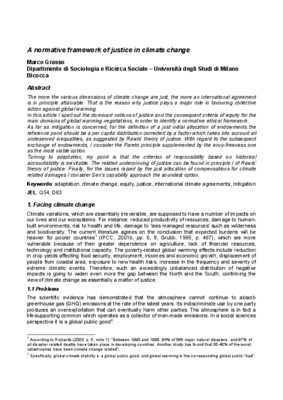 A normative framework of justice in climate change

By Marco Grasso
Get PDF (0 MB)

The more the various dimensions of climate change are just, the more an international agreement is in principle attainable. That is the reason why justice plays a major role in favouring collective action against global warming. In this article I spell out the dominant notions of justice and the consequent criteria of equity for the main domains of global warming negotiations, in order to identify a normative ethical framework. As far as mitigation is concerned, for the definition of a just initial allocation of endowments the reference point should be a per capita distribution corrected by a factor which takes into account all undeserved inequalities, as suggested by Rawls’ theory of justice. With regard to the subsequent exchange of endowments, I consider the Pareto principle supplemented by the envy-freeness one as the most viable option. Turning to adaptation, my point is that the criterion of responsibility based on historical accountability is inevitable. The related underpinning of justice can be found in principle I of Rawls’ theory of justice. Finally, for the issues raised by the just allocation of compensations for climate related damages I consider Sen’s capability approach the soundest option.adaptation, climate change, equity, justice, international climate agreements, mitigation