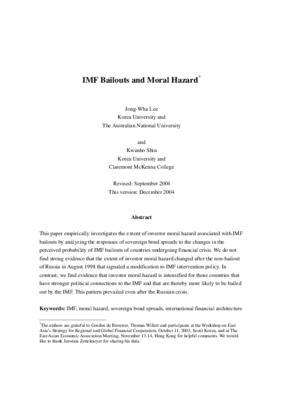 By Jong-Wha Lee and Kwanho Shin
Get PDF (0 MB)

This paper empirically investigates the extent of investor moral hazard associated with IMF bailouts by analyzing the responses of sovereign bond spreads to the changes in the perceived probability of IMF bailouts of countries undergoing financial crisis. We do not find strong evidence that the extent of investor moral hazard changed after the non-bailout of Russia in August 1998 that signaled a modification to IMF intervention policy. In contrast, we find evidence that investor moral hazard is intensified for those countries that have stronger political connections to the IMF and that are thereby more likely to be bailed out by the IMF. This pattern prevailed even after the Russian crisis.IMF, moral hazard, sovereign bond spreads, international financial architecture