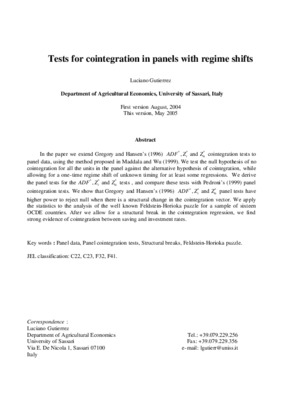 Tests for cointegration in panels with regime shifts

By Luciano Gutierrez
Get PDF (0 MB)

In the paper we extend Gregory and Hansen’s (1996)ADF, Za, Zt cointegration tests to panel data, using the method proposed in Maddala and Wu (1999). We test the null hypothesis of no cointegration for all the units in the panel against the alternative hypothesis of cointegration, while allowing for a one-time regime shift of unknown timing for at least some regressions. We derive the panel tests for the ADF, Za, Zt tests , and compare these tests with Pedroni’s (1999) panel cointegration tests. We show that Gregory and Hansen’s (1996) panel tests have higher power to reject null when there is a structural change in the cointegration vector. We apply the statistics to the analysis of the well known Feldstein-Horioka puzzle for a sample of sixteen OCDE countries. After we allow for a structural break in the cointegration regression, we find strong evidence of cointegration between saving and investment rates.Panel data, Panel cointegration tests, Structural breaks, Feldstein-Horioka puzzle